is pleased to announce that it has arranged a non-brokered private placement of 10 million units at a price of $0.15 per unit for gross proceeds of $1,500,000. Each unit consists of one common share and one transferable common share purchase warrant. Each whole warrant will entitle its holder to purchase, for a period of 24 months from the date of issue, one additional common share of the Issuer at the exercise price of $0.25 per share.

Directors, officers or other insiders of the Company may participate in the aforementioned offers. There are no material facts or material changes relating to the Company that have not been generally disclosed. A finder’s fee may be paid to eligible intermediaries in accordance with the policies of the TSX Venture Exchange. All securities issued under the offering will be subject to a hold period of four months and one day from the closing date. Both the offer and the payment of the finder’s fee are subject to the approval of the TSX-V.

The net proceeds of the Offering will be used by the Company for exploration expenditures on the Company’s mineral properties in British Columbia and for general working capital.

On behalf of the Board of Directors,

Ximen Mining Corp. holds a 100% interest in three of its precious metals projects located in southern British Columbia. Ximen’s two gold projects, the Amelia Gold Mine and the Brett Epithermal Gold Project. Ximen also owns the Treasure Mountain silver project adjacent to the former Huldra silver mine. Currently, the Treasure Mountain Silver project is subject to an option agreement. The option partner makes annual cash and stock payments and funds the development of the project. The company also acquired control of the Kenville Gold mine near Nelson in British Columbia which comes with surface and underground rights, buildings and equipment. 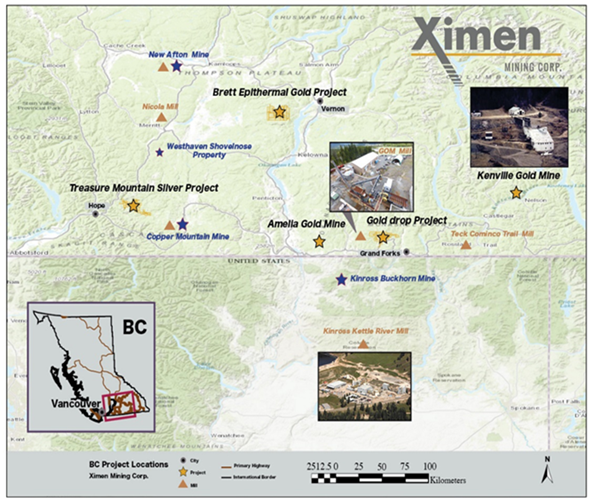 See the source version on accesswire.com: