Above and below: Supporters of the Suspend Measure S grassroots campaign rally in Eureka on Tuesday 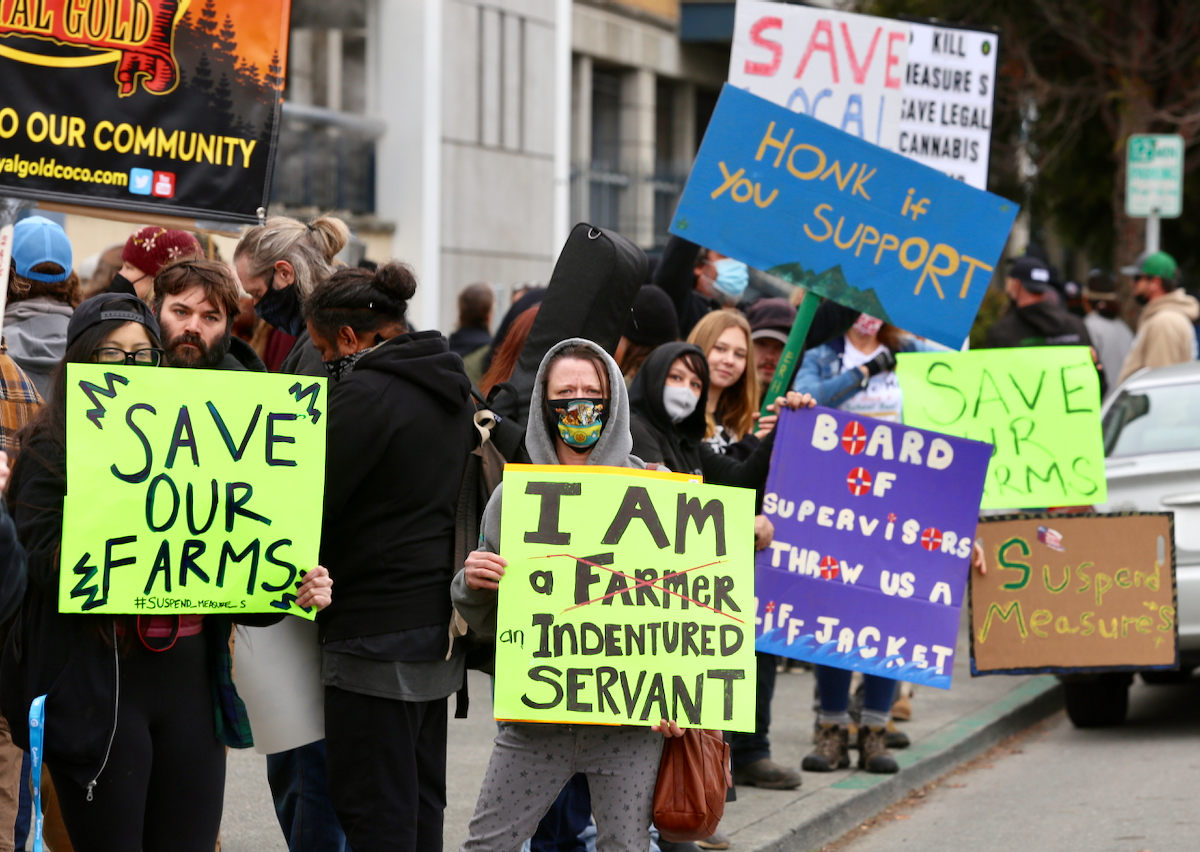 With cannabis prices at historic lows and those operating in the legalized Humboldt market struggling financially, around 250 cannabis growers, industry people and members of the allied community gathered outside the palace on Tuesday. Humboldt County court to demand a reprieve from taxes they say endanger the survival of farms.

Specifically in the crosshairs of activists is Measure S, the county’s cultivation tax originally passed by voters in 2016 and tweaked slightly by the Board of Overseers in subsequent years. The measure, crafted with input from local farmers, was passed before the state regulatory framework materialized and now those affected say the combined burdens are too heavy to bear. Promotional materials distributed by the Suspend Measure S Grassroots campaign ahead of today’s protest outlined the group’s goals:

The wholesale price of cannabis plummeted after legalization due to overproduction and prohibitive taxation, including the Humboldt County grow tax based on the square footage of licensed grow space. This tax is paid even if no cannabis is produced or sold, and the tax rate does not fluctuate with market conditions. This tax does not apply to any other agricultural product. As a result, HumCo’s cannabis industry and the local economy are under threat as farms continue to close. The Suspend Measure S campaign calls on HumCo’s Supervisory Board to:

If their request to suspend Measure S cultivation taxes is granted, proponents of the move say they will use their less-taxed period to solicit more public input to help develop a tax system they find fairer.

Speaking at Tuesday’s rally, Natalynne DeLapp, executive director of the Humboldt County Growers Alliance, spoke out strongly against state and county taxes and regulations after legalization before citing some of the grievances she and its members have with Measure S.

“We stand here today not asking for a handout, but for a reprieve from the Humboldt County flat-rate cultivation tax, a tax that is not adapting to market conditions,” DeLapp said. “When Measure S was drafted and passed in 2016, over six years ago, the wholesale price of cannabis was at least four times higher and supported by prohibition. The cost of producing cannabis was lower because California had not yet implemented its licensing fees and tax structures, and the expenses of bringing pre-existing farms into compliance had not been made.

DeLapp concluded her remarks by painting a grim picture of what she thinks taxation has done to the local cannabis industry: “Humboldt County, we tell you there’s no money left. You cannot squeeze blood from a stone.

Tuesday’s rally brought together a diverse list of speakers critical of Measure S and the state of the local cannabis industry in general. You can find a sample of what they had to say below. 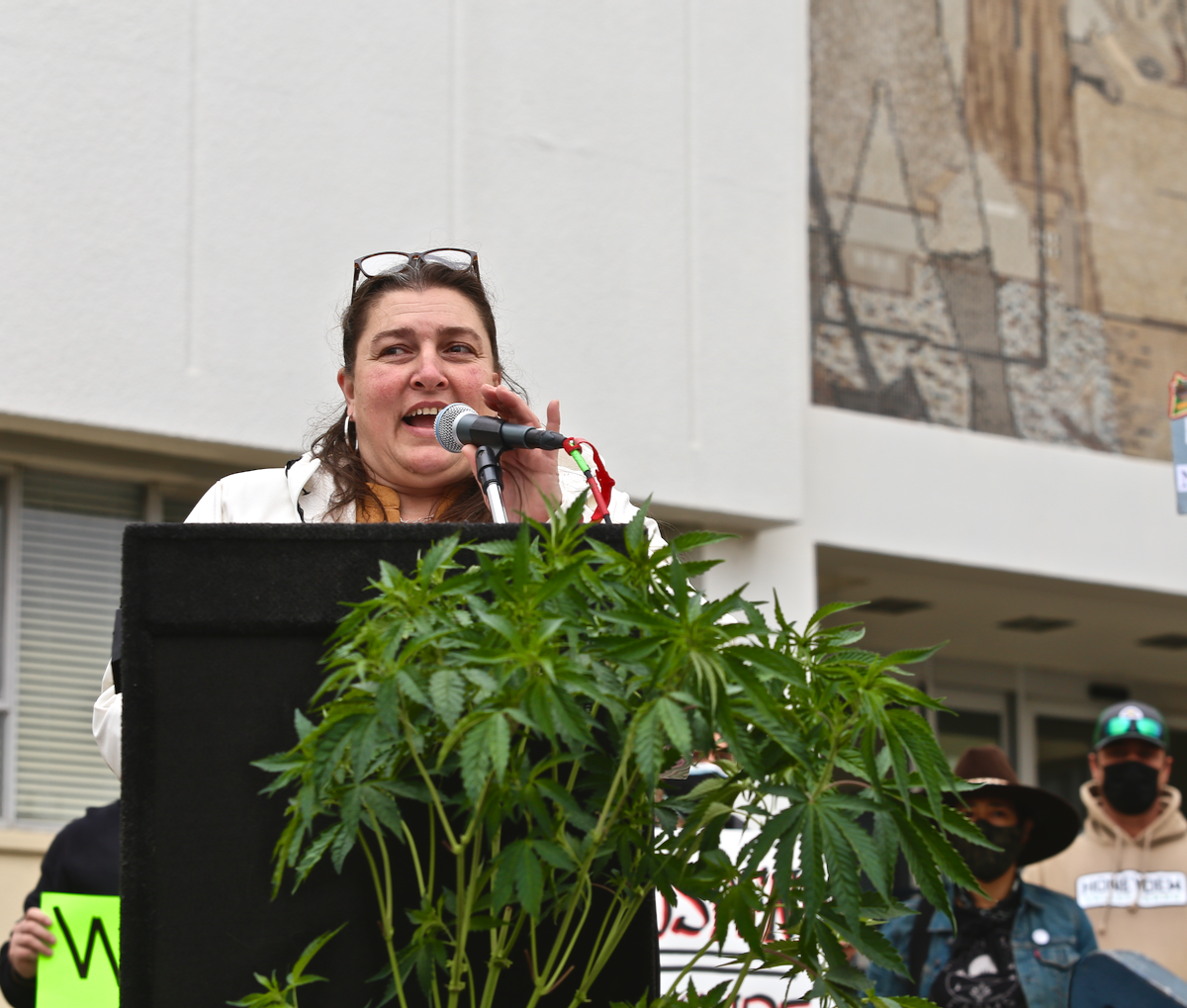 Sequoyah Hudson, co-owner of Eight-Mile Family Farms and CEO of the Humboldt Sun Growers Guild, pointed out that the S measure was the result of growers asking to be taxed because “it was the right thing to do.” But now she says the flaws in the measure are more apparent and the impacts are financially overwhelming her community.

“Put simply and clearly, there is no money to start the 2022 legal growing season, let alone pay the Measure S taxes that have been deferred from 2021. We need your help. Please tell our Board of Supervisors to immediately suspend and repeal the Measure S tax and let’s get to work creating a more efficient and responsible way for our cannabis operators to continue contributing to county services while benefiting much-needed relief Let’s put in place a more sustainable tax model. 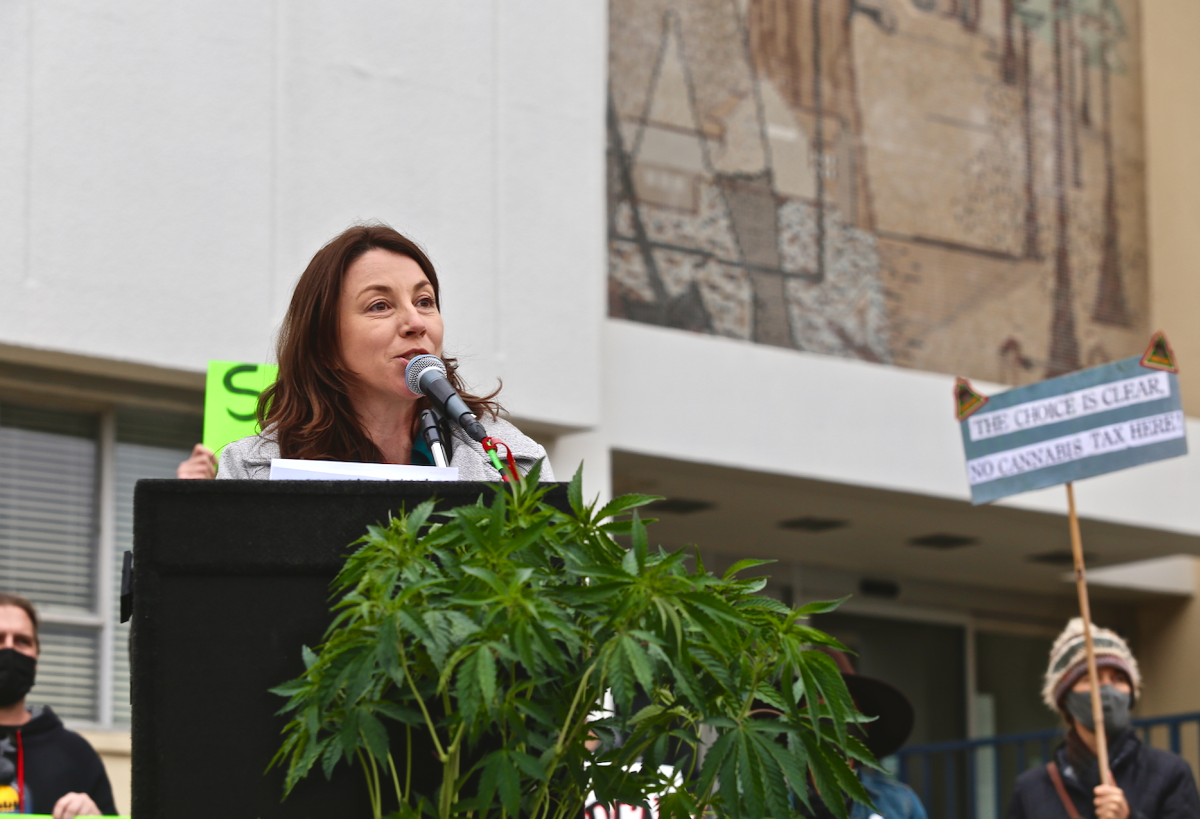 HCGA Natalynne DeLapp pointed out that the farms she represents are suffering, they believe, because of a tax system unlike any other industry.

“Self-funded cannabis companies cannot survive two years of loss profits. Plus, the proverbial cash pickle barrels have long since run out, having been spent on county land use permits. And legal cannabis businesses cannot access outside capital or bank loans, or any financial support available for traditional agriculture. No other industry is subject to a duty tax like cannabis, which means no other business licensed to operate in Humboldt County has to pay a tax directly to the county for the opportunity to participate in the economy. 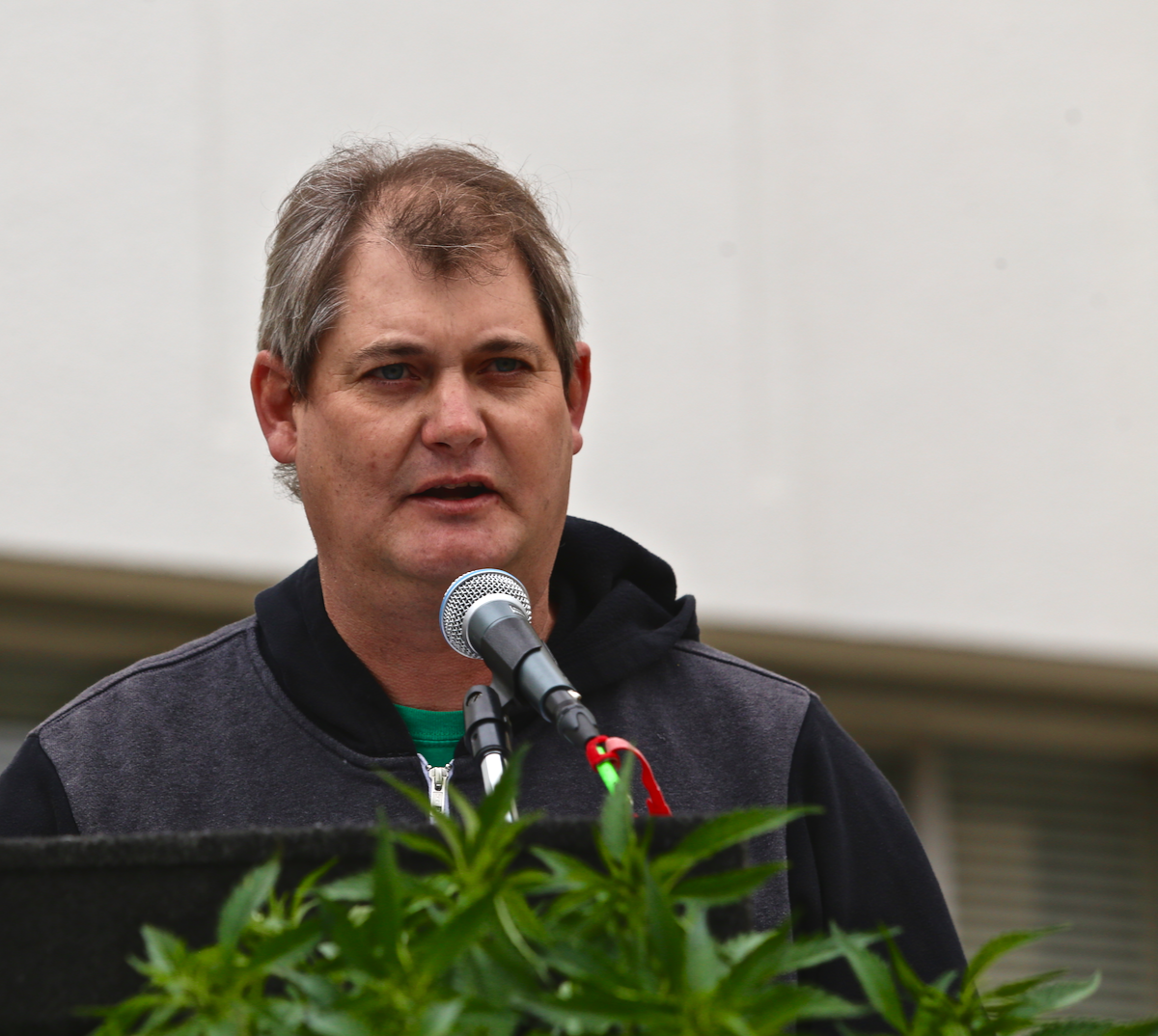 Born in Humboldt Dylan Mattole is co-owner of Mattole Valley Sungrown in Honeydew, a “small family farm” that represents “a rural way of life that is rapidly becoming very rare in America.” Mattole was quick to bring his farm into compliance after legalization, but now compares the experience to “being on a roller coaster while they build and repair the track in front of us”.

“People voted for change so we could grow and sell this plant. But we also voted to tax it like no other crop or business. Why? When Measure S was passed, we were all excited about becoming legitimate businesses. We did not yet know what the state regulations would look like. Now we do and it’s a mess. 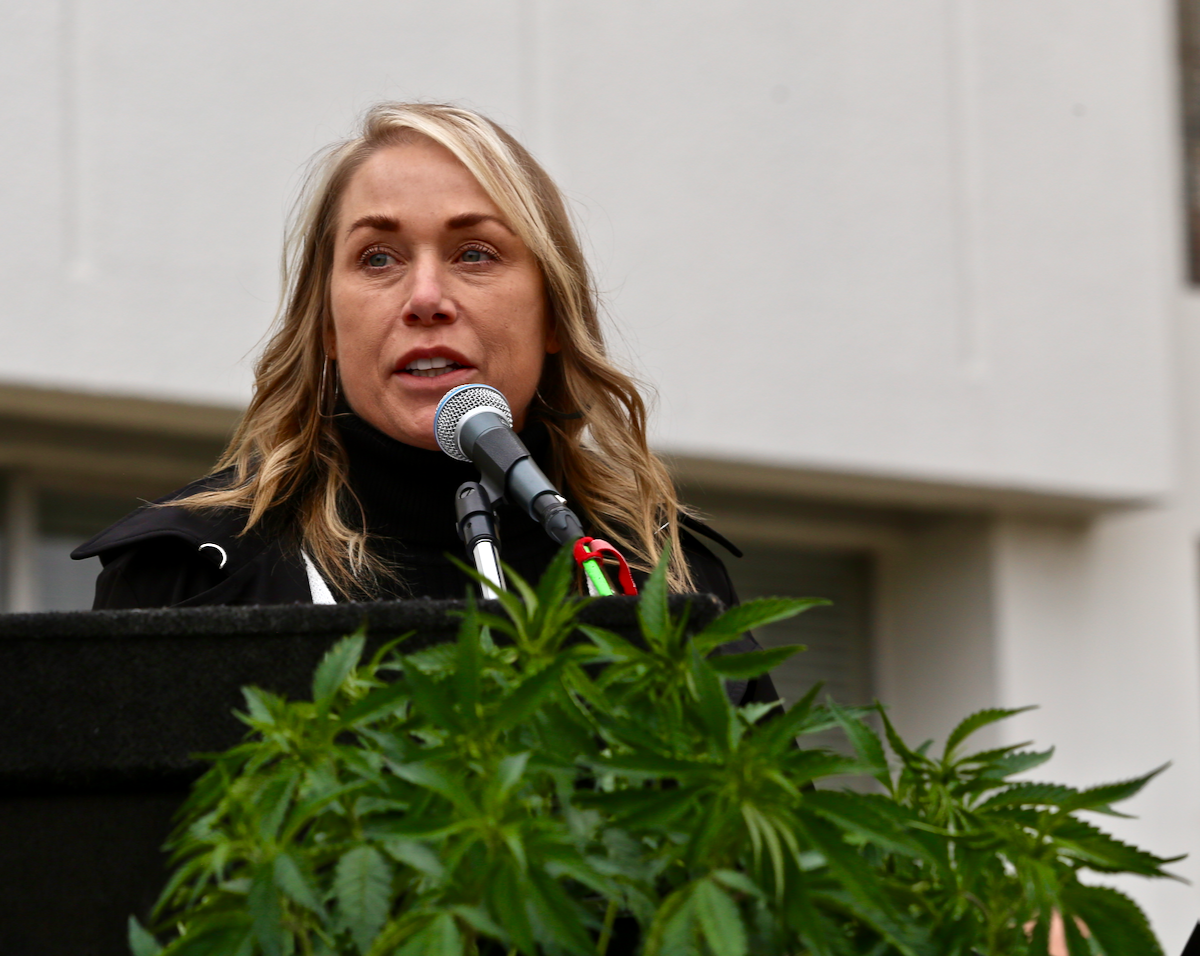 Although she herself is not a farmer, a real estate agent Sandi DeLuca has sold many properties in the hills over the years and is worried about what she sees. Following legalization, it was inundated with people looking to buy farms in Humboldt. These days, more people are looking to sell.

“Over the past six years since legalization, I have witnessed the rise and fall of cannabis property values. In 2017, property prices skyrocketed due to the perceived value caused by the number limited number of properties that would qualify for a cultivation license in Humboldt County What no one understood then was the complexity of bringing pre-existing farms into compliance with California environmental and agricultural law. 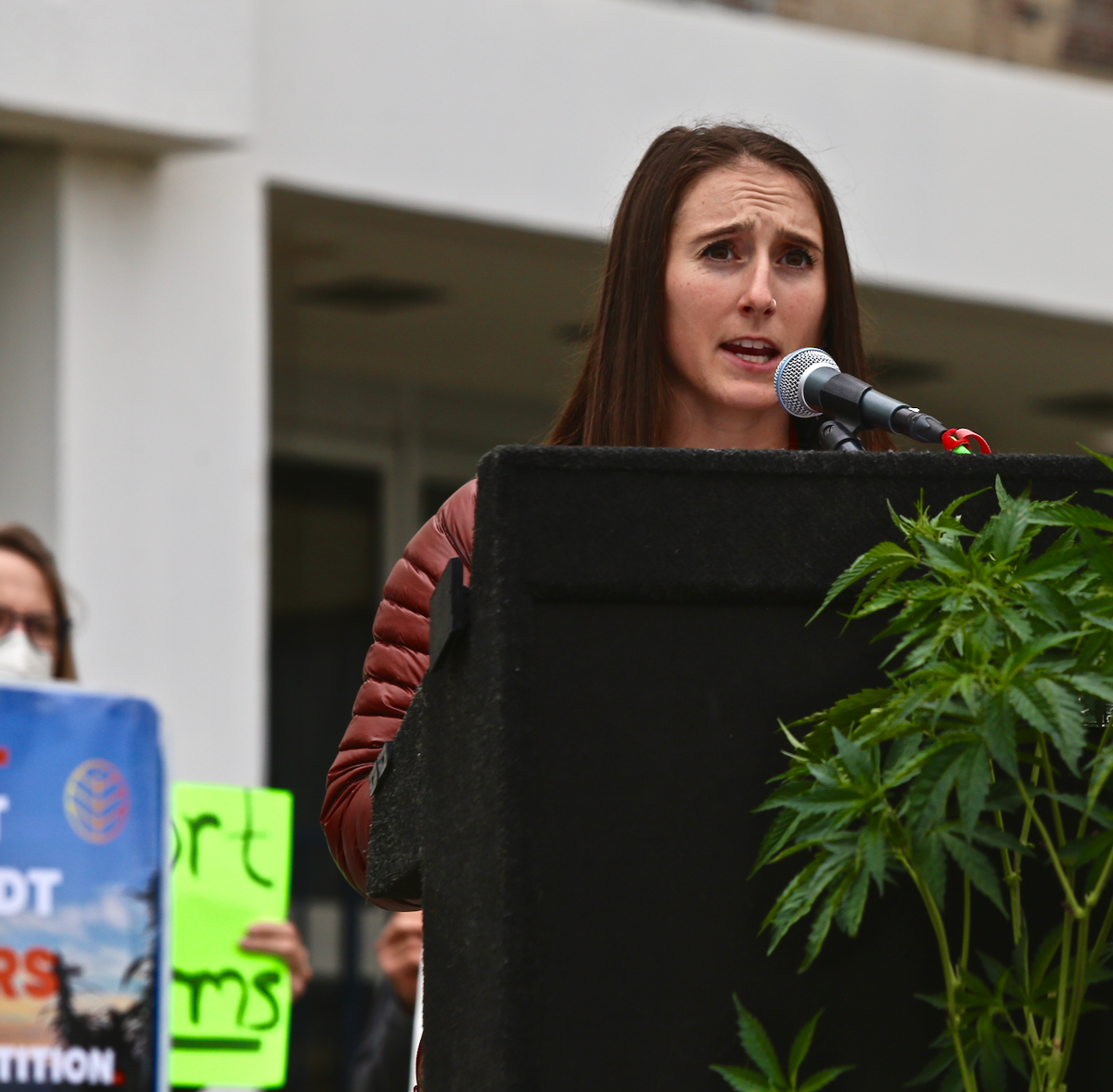 Jackie Riccio, executive director of Cannabis for Conservation, sought to highlight much of the environmental progress being made in how Humboldt farmers grow their crops sustainably, but said those efforts are at risk if people are not able to pay their bills.

“So why, instead of draining dry farmers financially, are we not ensuring they can thrive through the regulatory process and form lasting conservation and remediation partnerships around the shared value of agriculture? stewardship? Why are we threatening this opportunity and the state’s conservation goals with excessive taxation? » 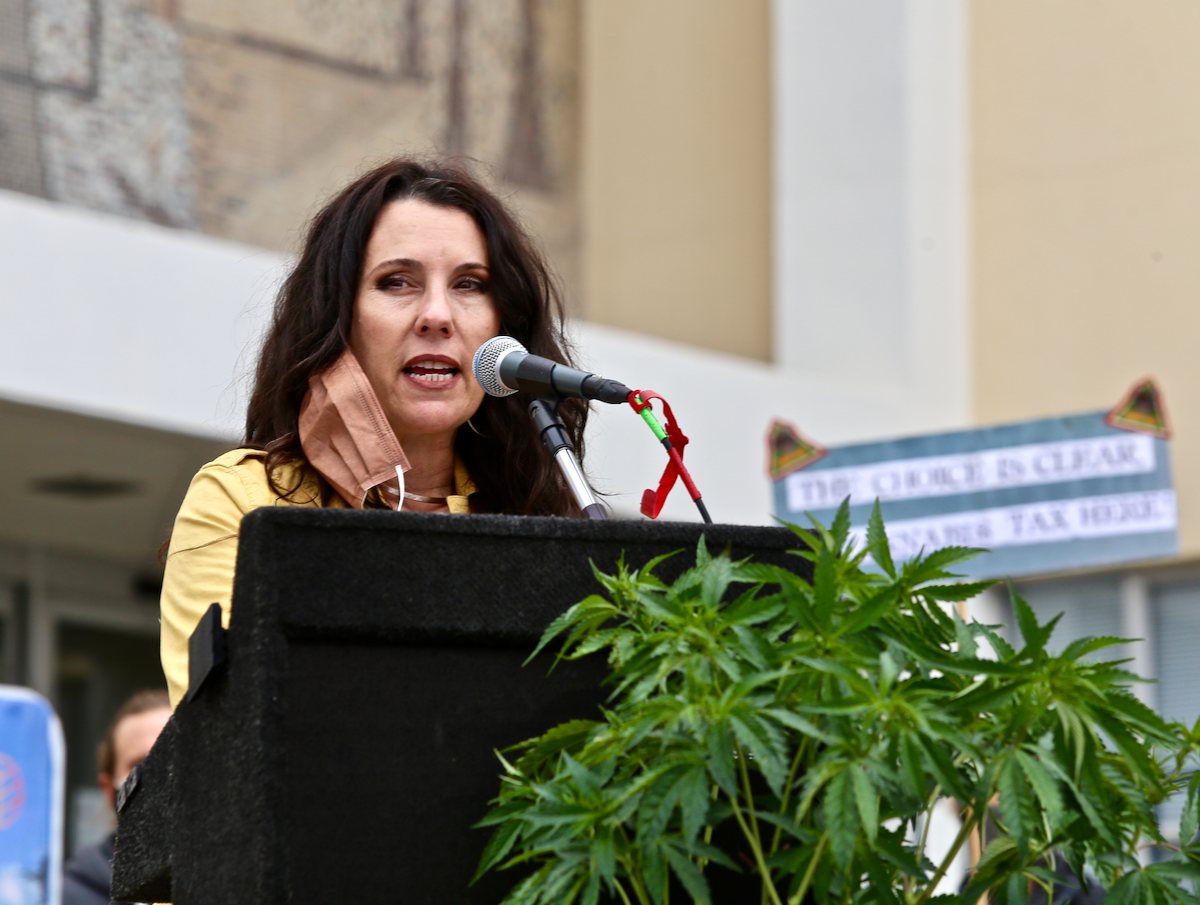 As Director of Operations for the Southern Humboldt Business and Visitors Bureau, Laura Lasseter regards cannabis as the “driving force” of Humboldt’s economy and looks forward to a developed cannabis-related tourism sector. 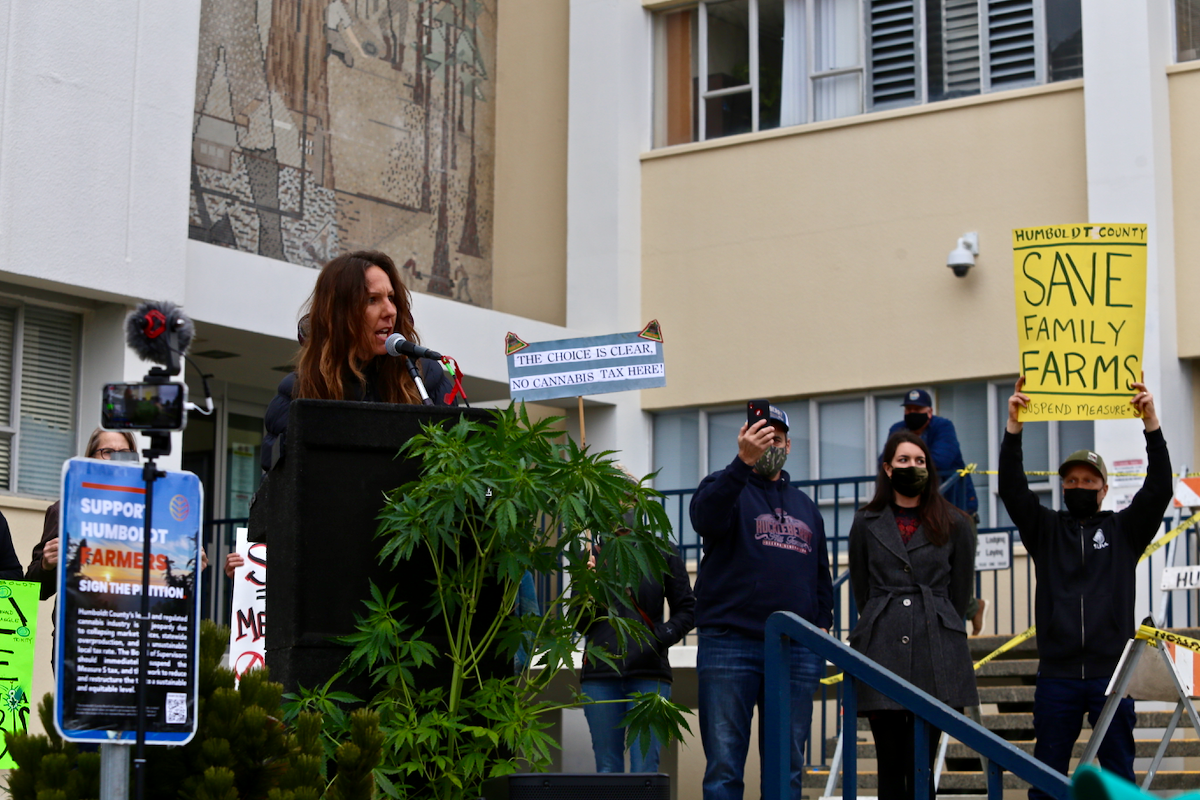 Melanie Johnson, a longtime local cannabis grower at Alpenglow Farms, echoed what his fellow speakers said, but went further by viewing this struggle as a moral issue. She spoke of the fear she feels of potentially losing the only life and home she has ever known.

“I don’t need to go on describing and defining [the impacts of] Measure S. I don’t need to continue to uphold the morality of cannabis growers and the myriad ways we support our communities. It’s been said before and it’s been said before. Instead, I call on Supervisor Bass, Supervisor Bushnell, Supervisors Wilson, Bohn and Madrone to hear the words of their constituents with an open heart and an open mind, to accept and acknowledge that those of us who remained standing handled every hoop and every obstacle laid in front of us. . And we ask not only for a lifeline, but the right to our way of life. 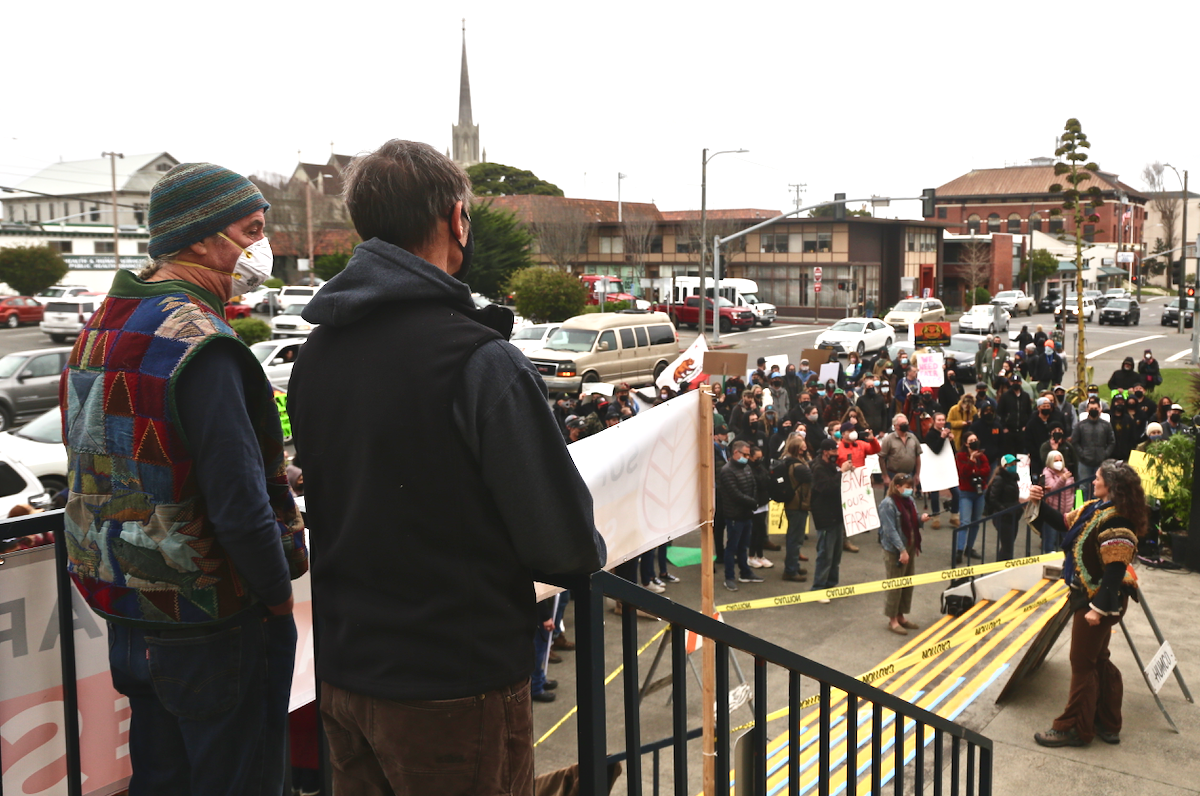 Above: supervisor Steve Madrone takes part in the debates; Below: Supervisors Michelle Bushnell and Rex Bohn were also present 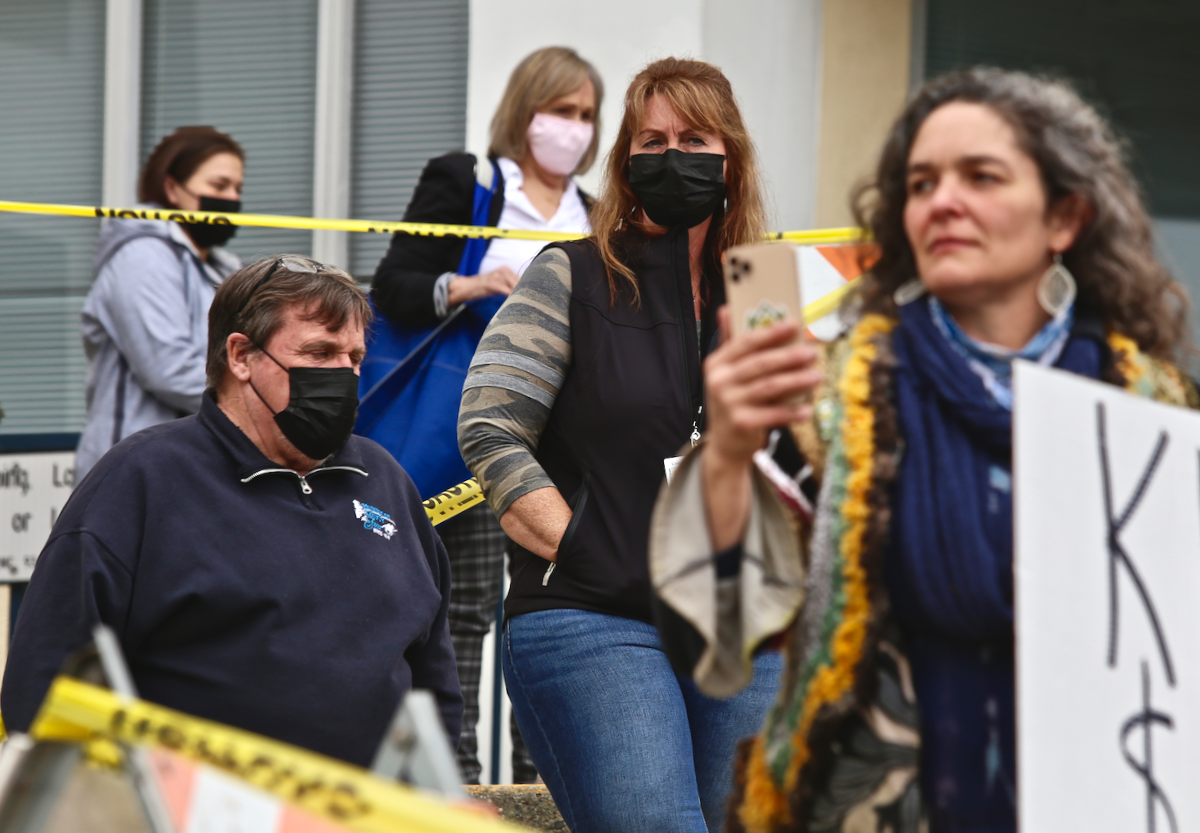 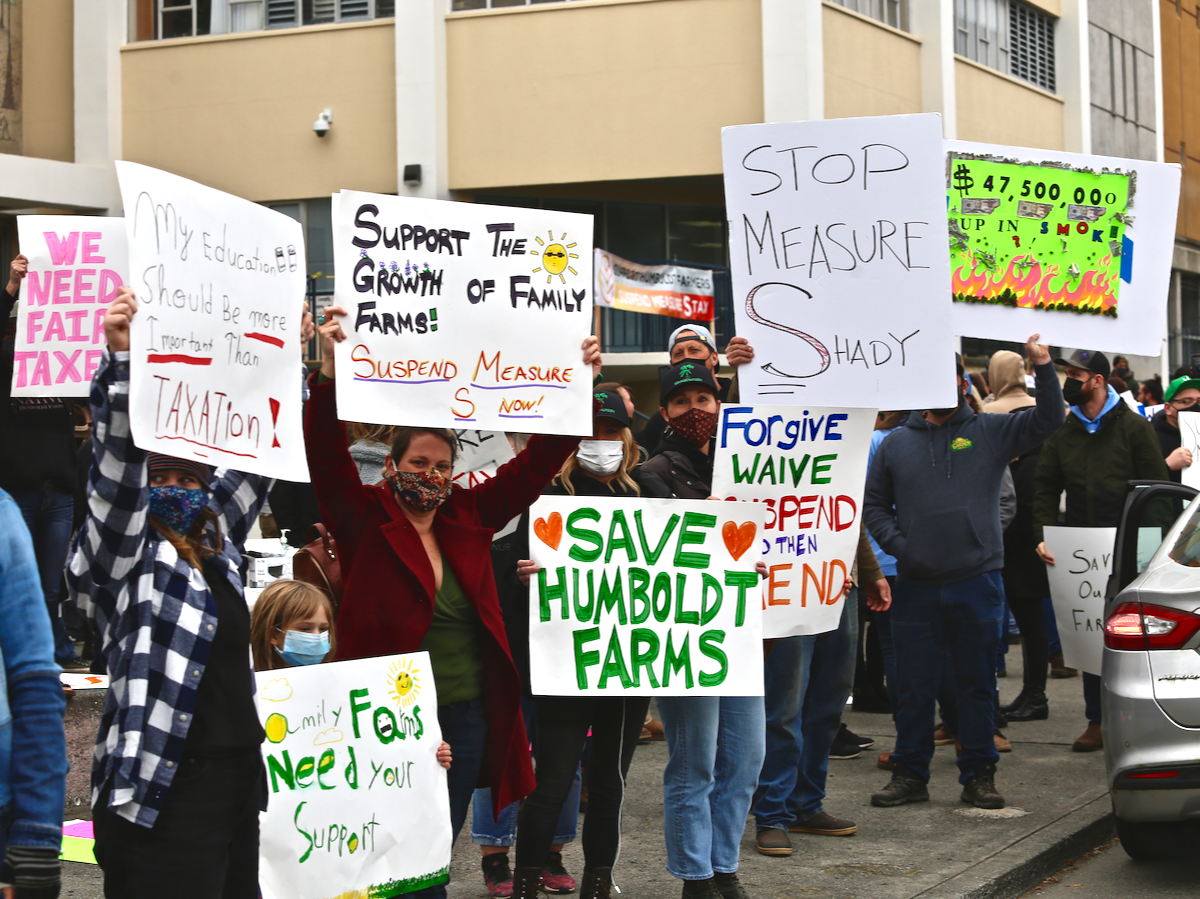 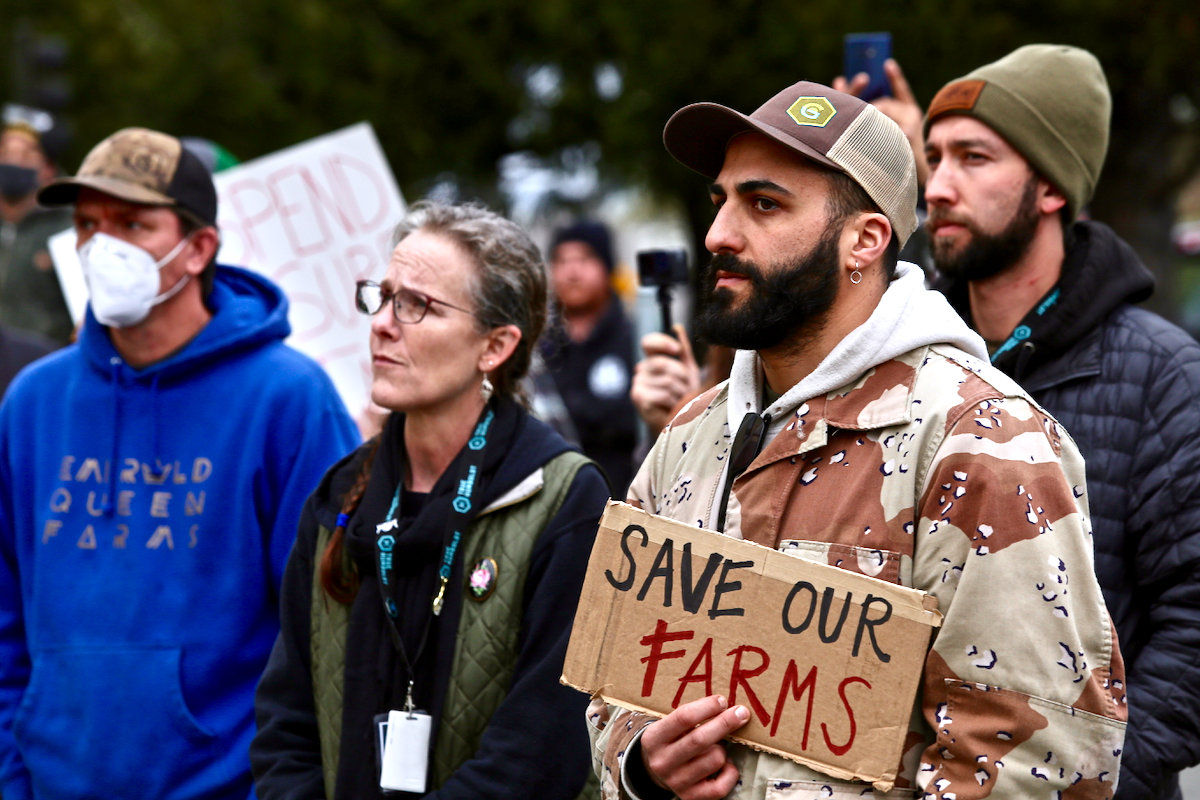 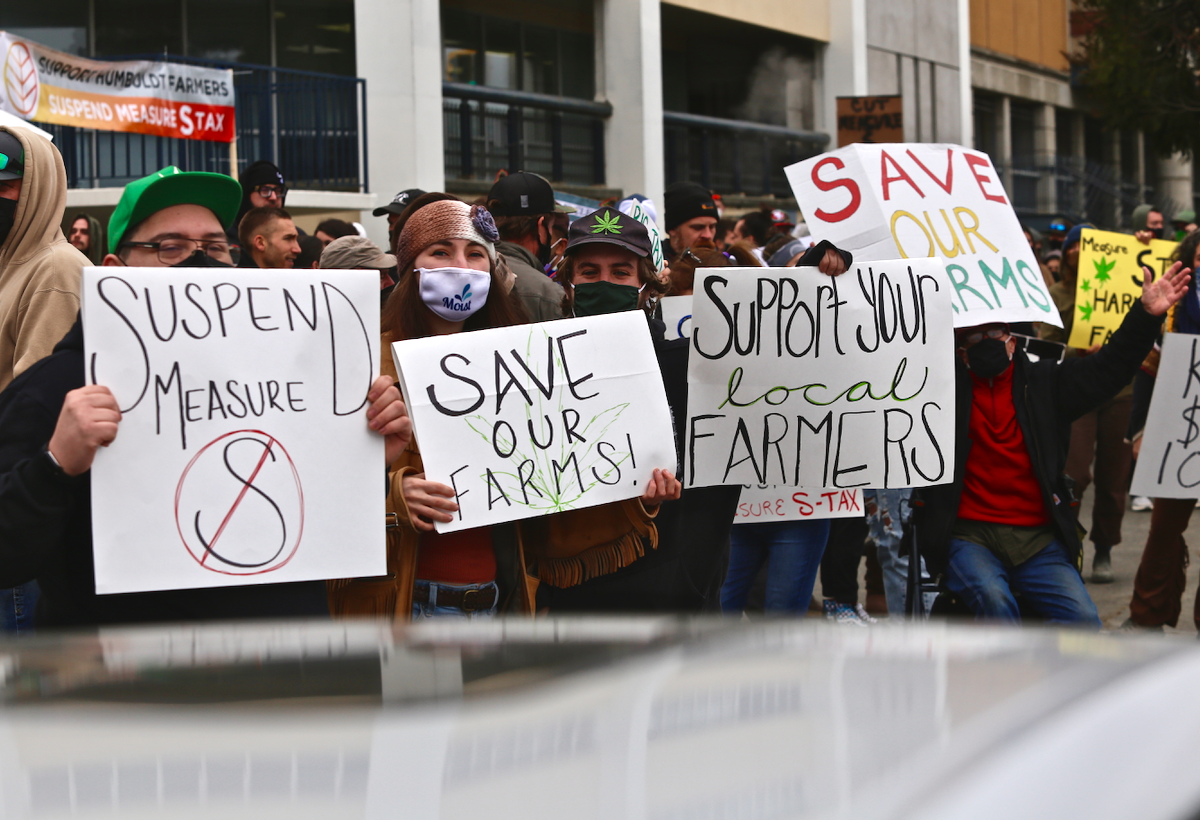 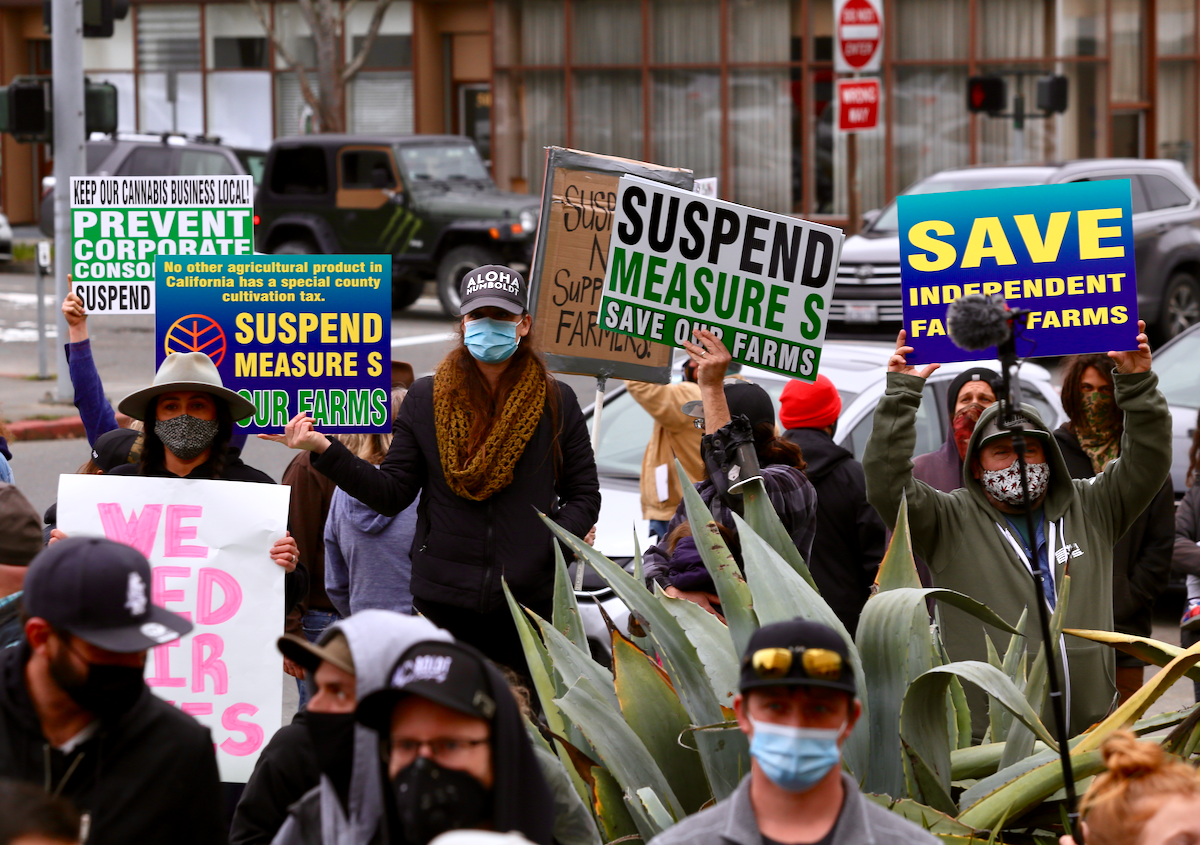 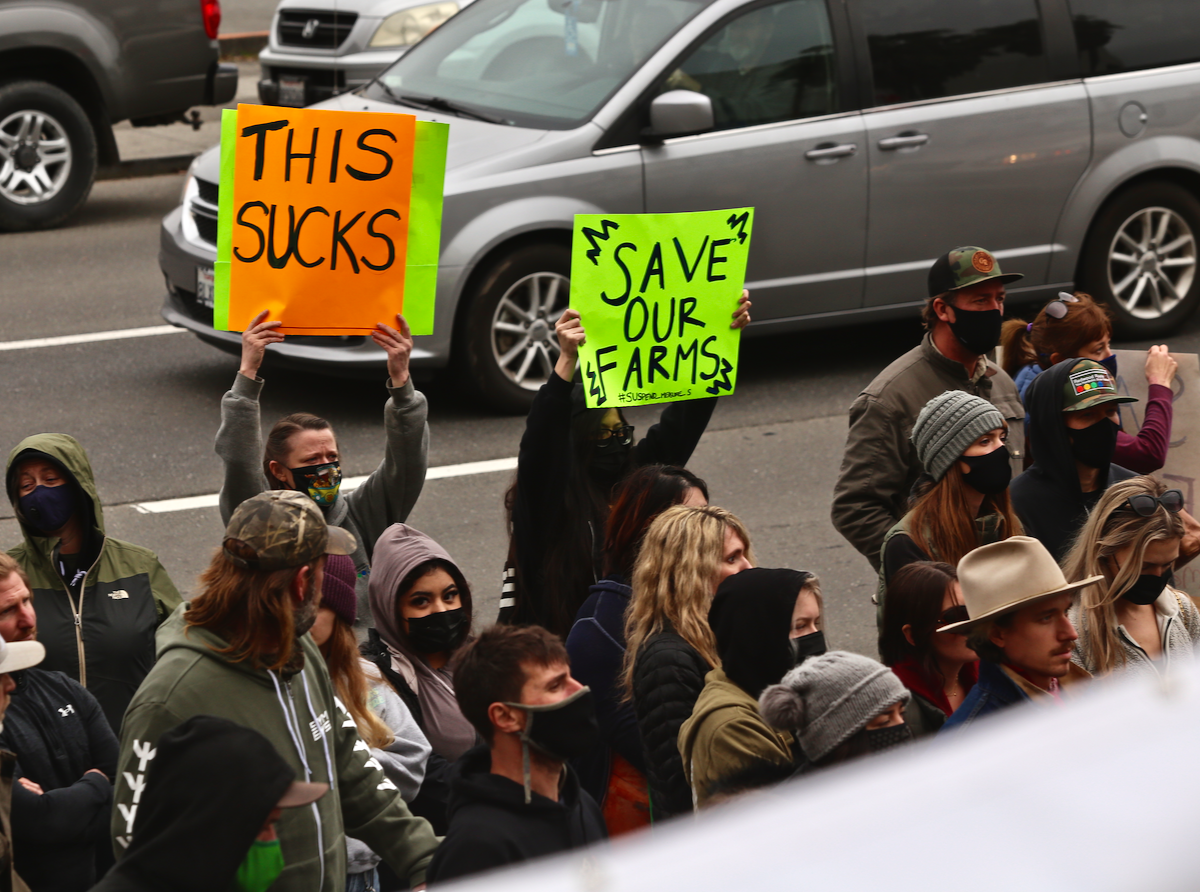 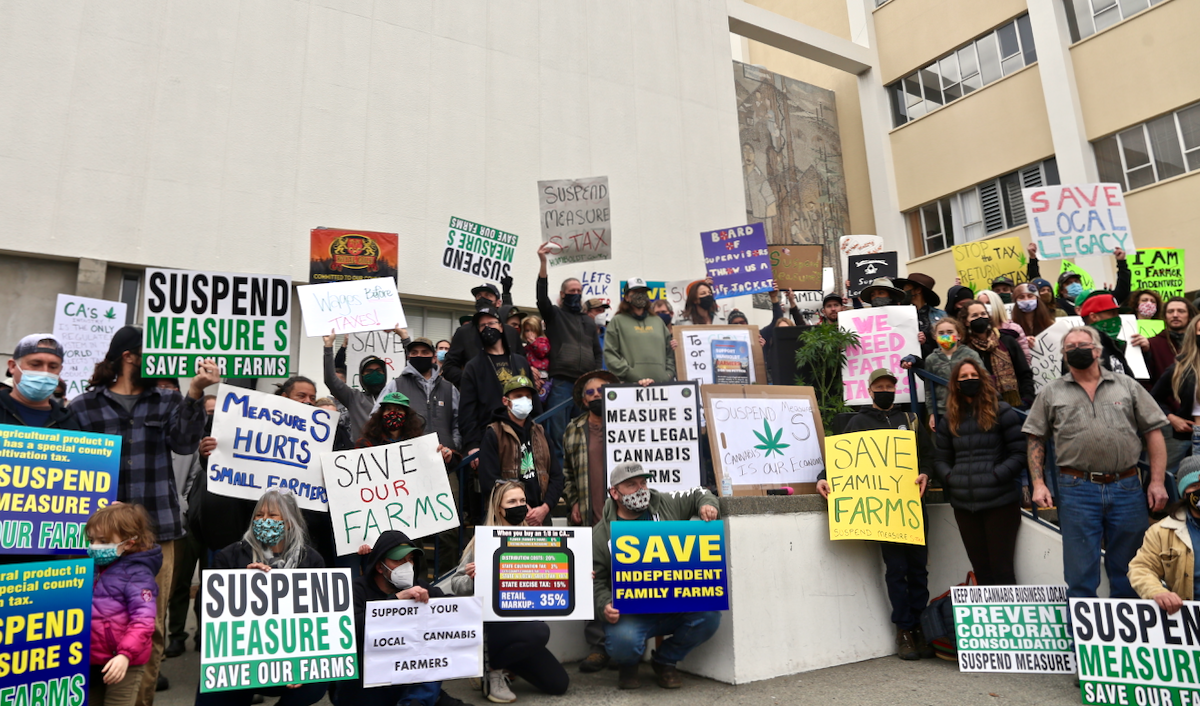